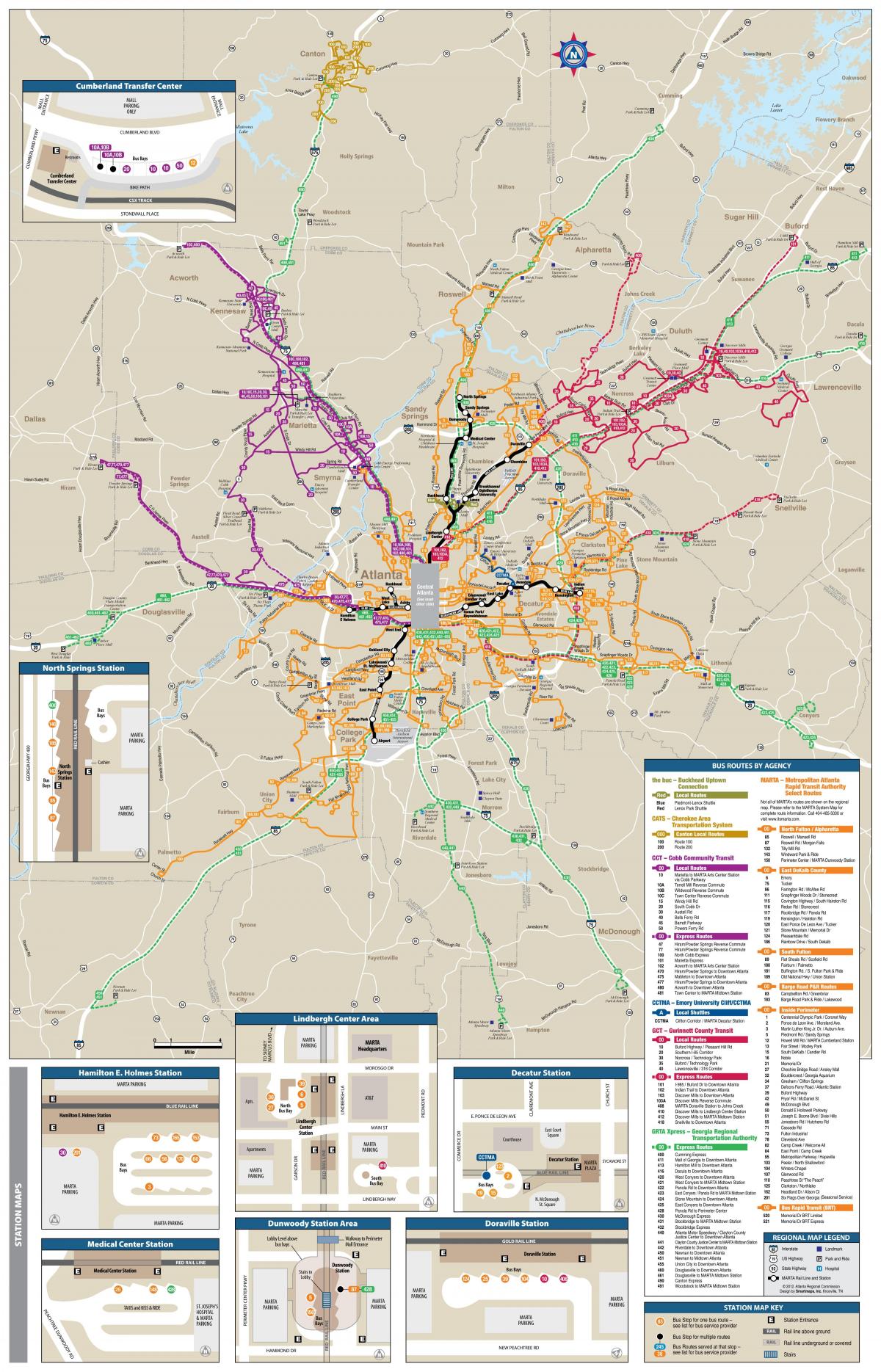 Atlanta transportation system is a complex infrastructure of several systems, including 47.6 miles of heavy rail, 91 bus transit routes, 1600 licensed taxis, a comprehensive network of freeways, one of the world busiest airports and over 45 miles of bike paths as its mentioned in Atlanta transports map. The city began as a railroad town, and remains a major rail junction and home of major classification yards for Norfolk Southern and CSX. Amtrak provides the only remaining passenger service via its daily Crescent service to cities between New Orleans and New York. A 2011 Brookings Institute study placed Atlanta 91st of 100 metro areas for transit accessibility.

The Metropolitan Atlanta Rapid Transit Authority or MARTA (play /ˈmɑrtə/) is the principal rapid-transit system in the Atlanta metropolitan area and the ninth-largest in the United States. Formed in 1971 as strictly a bus system, MARTA operates a network of bus routes linked to a rapid transit system consisting of 48 miles (77 km) of rail track with 38 train stations as its shown in Atlanta transports map. MARTA operates almost exclusively in Fulton and DeKalb counties, with bus service to two destinations in Cobb county (Six Flags Over Georgia and the Cumberland Transfer Center next to the Cumberland Mall) and a single rail station in Clayton County at Hartsfield-Jackson Atlanta International Airport. MARTA also operates a separate paratransit service for disabled customers. As of 2009, the average total daily ridership for the system (bus and rail) was 482,500 passengers.

MARTA has never received any operational funding from the State of Georgia, making it the largest public transportation agency in the United States and the second-largest transit agency in Anglo-America (after the Toronto Transit Commission) not to receive state/provincial funding for operational expenses (see Atlanta transports map). MARTA, our transit rail system, carries you across the city, through our unique neighborhoods and beyond. Climb on board the newest addition to the city public transport, the Atlanta Streetcar, to zip you around the entertainment district. If you prefer to stay with wheels, cruise around by car, rideshare, hop in a taxicab, shuttle, or even indulge in a limo service. Or, take in some fresh air and enjoy a stroll through our in-town neighborhoods and beautiful parks on foot or bicycle.