You can find on this page the Atlanta tourist map to print and to download in PDF. The Atlanta tourist attractions map presents the monuments, museums, parks and points of interest of Atlanta in Georgia - USA.
Atlanta has a lot of amenities for visitors, from one of the world largest aquariums, to headier destinations such as the Jimmy Carter Presidential Library as its shown in Atlanta tourist map. And thanks to the world busiest airport (a short train ride away) and plenty of hotels, downtown popular destinations are an easy escape for anyone on summer break. 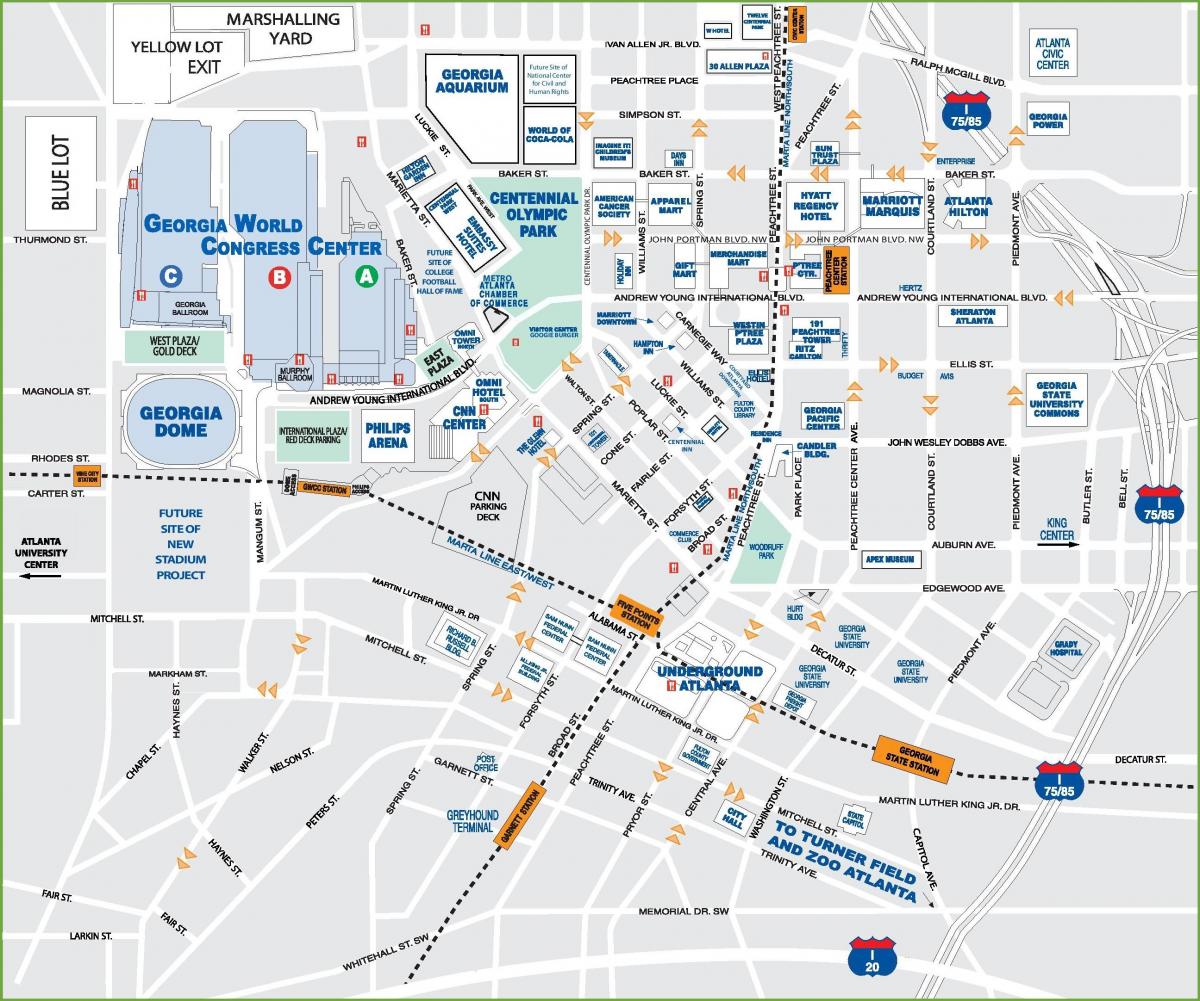 Map of Atlanta points of interest

The Atlanta sightseeing map shows all tourist places and points of interest of Atlanta. This tourist attractions map of Atlanta will allow you to easily plan your visits of landmarks of Atlanta in Georgia - USA. The Atlanta tourist map is downloadable in PDF, printable and free.

Atlanta, capital of Georgia, is in almost all respects the principal center of the American South. The city was originally a military outpost, becoming an early railway junction and rapidly developing into an important commercial town. During the Civil War, it was an important Confederate stronghold and supply base but was reduced to rubble when captured by Union General William Sherman. These events became the setting for Atlanta native Margaret Mitchell best-selling novel Gone with the Wind, which won her the Pulitzer Prize. In recent years, Atlanta has become a major economic and cultural center and an important hub of air traffic. Internationally famed businesses, including Coca-Cola and CNN, have their headquarters here. Do not expect to find a romantic Southern city, but rather a large and vibrant American city with Southern charm and plenty of places to visit. Its tourist attractions range from the arts to sports and include historic sites, museums, and gardens as you can see in Atlanta tourist map.

About 51 million people came to visit metro Atlanta last year, according to DK Shifflet and Associates as its mentioned in Atlanta tourist map. Most tourists to Atlanta came from elsewhere in the United States. In fact, the most common state of origin was Georgia, which accounted for roughly 40 percent of visitors, DK Shifflet said. The next most common were visitors from Florida, California, Illinois and Michigan. About 1.2 million visitors came from outside the United States, according to Tourism Economics and the Atlanta Convention and Visitors Bureau. Georgia tourism generated $61.1 billion in direct, indirect and "induced" economic impact last year, according to the Georgia Department of Economic Development. While no precise statistics are available, a little more than half of tourism economic impact in Georgia is probably in metro Atlanta, said Kevin Langston, the state deputy commissioner for tourism.

Metro Atlanta luster as a tourist destination has grown a bit shinier this year, according to a study by a company that tracks bookings and searches. Leisure and hospitality is a sizeable part of the metro Atlanta economy: about 300,000 people work in the sector, up 3.3 percent from a year ago, according to the Bureau of Labor Statistics. 48 million visitors annually who spend over $25 billion as you can see in Atlanta tourist map. Supports $6 billion in resident wages and over 400,000 jobs. 8th largest tourism economy in the country. Over $708.5 million in state tax revenue from visitor expenditures. Equates to a $380 savings on state and local taxes per household. In Atlanta, “Leisure & Hospitality” employs 9.3% of the metro workers. Tourism in Atlanta accounts for 51% of Georgia tourism economy. 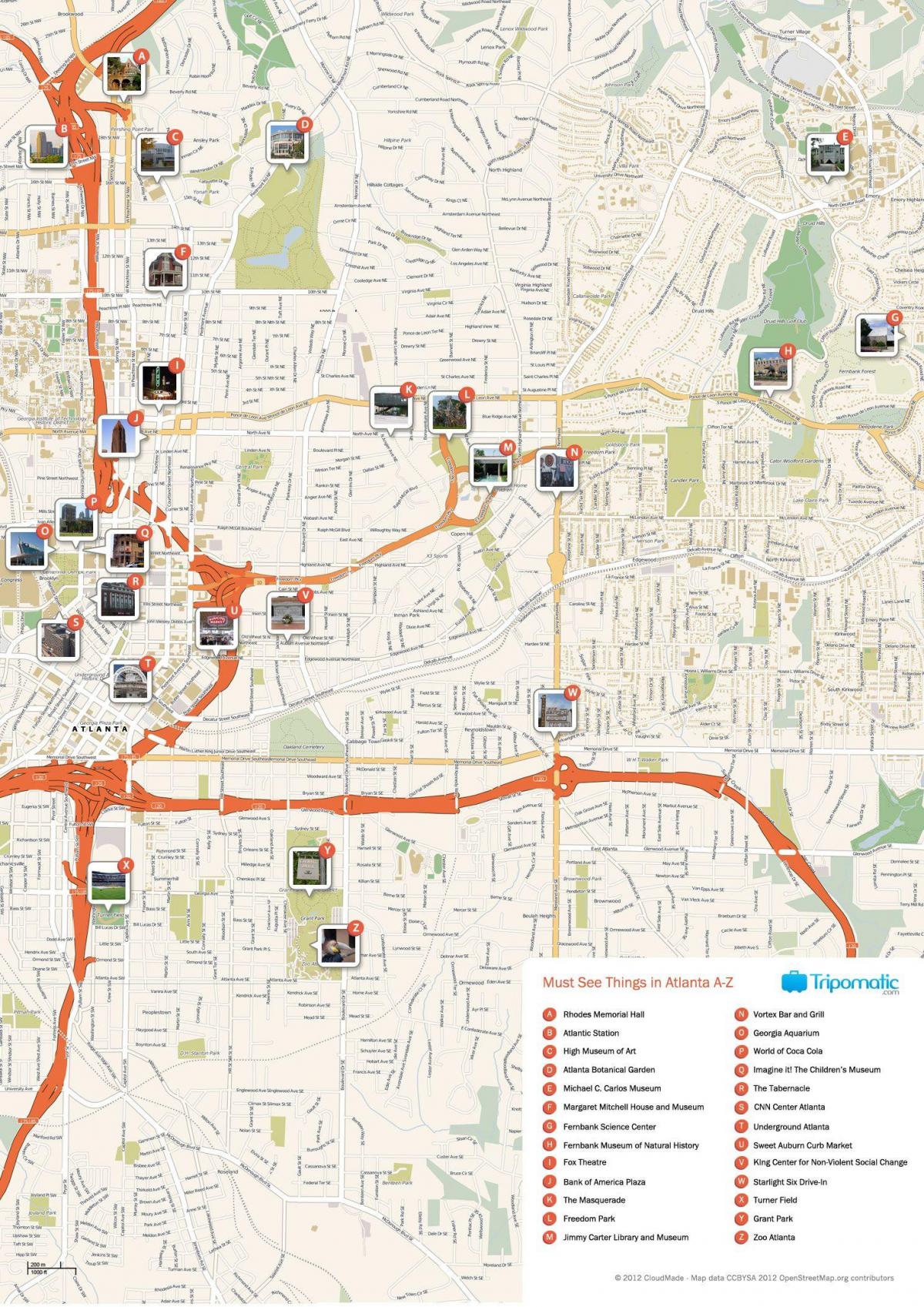 Atlanta features the world largest aquarium, the Georgia Aquarium, which officially opened to the public on November 23, 2005. The aquarium features more aquatic life than can be found in any other aquarium, in tanks holding approximately eight million gallons of water. Adjacent is the World of Coca-Cola which opened in May 2007, featuring the history of the world famous soft drink brand and its well-known advertising. Pemberton Place, the 20-acre (81,000 m2) site which houses the Georgia Aquarium and the World of Coca-Cola is within walking distance of Centennial Olympic Park, the Georgia Dome, Philips Arena, the CNN Center and other downtown Atlanta tourist attractions. Underground Atlanta, a historic shopping and entertainment complex is situated under the streets of downtown Atlanta as its shown in Atlanta attractions map. In addition Atlantic Station, a huge new urban renewal project on the northwestern edge of Midtown Atlanta, officially opened in October 2005. While not a museum per se, The Varsity is the main branch of the long-lived fast food chain, featured as the world's largest drive-in restaurant.

The arts are represented by several theaters and museums, including the Fox Theatre. The Woodruff Arts Center is home to the Alliance Theatre, Atlanta Symphony, and High Museum of Art as its mentioned in Atlanta attractions map. The Atlanta Contemporary Art Center is the city home for challenging contemporary art and education geared toward working artists and collectors of art. Museums geared specifically towards children include the Fernbank Science Center and Imagine It. Atlanta Children Museum. The High Museum of Art is the city major fine/visual arts venue, with a significant permanent collection and an assortment of traveling exhibitions. The Michael C. Carlos Museum, located at Emory University, houses the Southeast largest collections from ancient Egypt, Greece, Rome, the Near East, and the ancient Americas. The Atlanta Opera, which was founded in 1979 by members of two struggling local companies, is now one of the fastest growing opera companies in the nation and garners attention from audiences around the world. Stone Mountain is the largest piece of exposed granite in the world. On its face are giant carvings of Jefferson Davis, Robert E. Lee, and Stonewall Jackson. It is also the site of laser shows in the summer. A few miles west of Atlanta on I-20 is the Six Flags Over Georgia Theme Park, which opened near the city in 1967, and was the second theme park in the Six Flags chain.

Atlanta hosts a variety of museums on subjects ranging from history to fine arts, the Olympics, natural history, and beverages. History museums and attractions include the Atlanta History Center; the Martin Luther King, Jr. National Historic Site, which contains the preserved home of Dr. Martin Luther King, Jr., as well as King final resting place; the Atlanta Cyclorama and Civil War Museum, a huge painting and diorama in-the-round, with a rotating central audience platform, that depicts the Battle of Atlanta in the Civil War; the Carter Center and Presidential Library; historic house museum Rhodes Hall; the Wren Nest, former home of Brer Rabbit author Joel Chandler-Harris; and the Margaret Mitchell House and Museum. Piedmont Park as you can see in Atlanta attractions map hosts many of Atlanta festivals and cultural events. In 1887, a group of prominent Atlantans purchased 189 acres (0.76 km2) of farmland to build a horse racing track, later developed into the site of the Cotton States International Exposition of 1895. In 1904, the city council purchased the land for US$98,000, and today it is the largest park in metro Atlanta, with more than 2.5 million visitors each year. The grounds were part of the Battle of Peachtree Creek – a Confederate division occupied the northern edge on July 20, 1864 as part of the outer defense line against Sherman approach. Next to the park is the Atlanta Botanical Garden. Zoo Atlanta, with a panda exhibit, is in Grant Park. 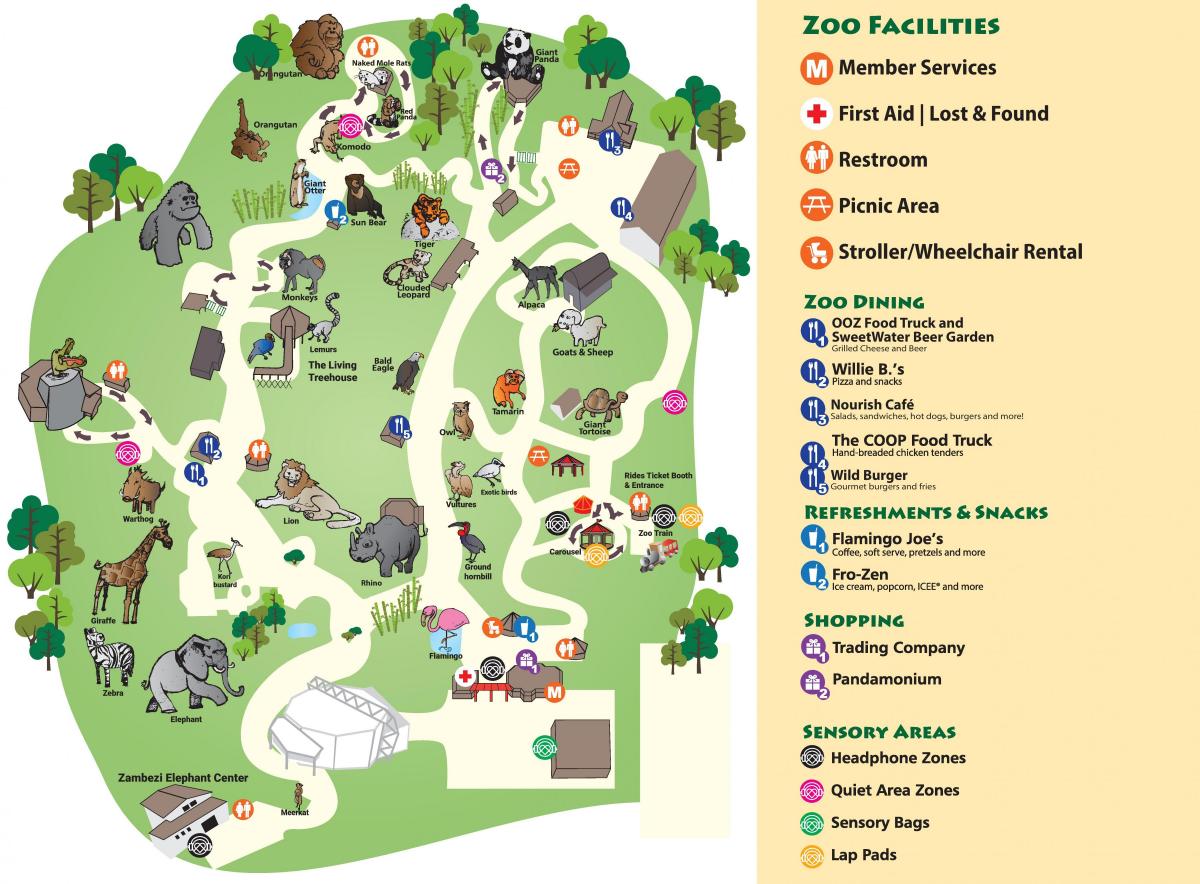 Zoo Atlanta is an Association of Zoos and Aquariums (AZA) accredited zoological park in Atlanta, Georgia as its mentioned in Atlanta zoo map. Founded in 1889, the zoo is Atlanta oldest cultural destination and is one of the oldest continuously operating zoological institutions in the United States. Zoo Atlanta houses over 1,300 animals representing more than 220 species. Home to the nation largest collections of gorillas and orangutans, the zoo is also one of only four zoos in the U.S. currently housing giant pandas. Zoo Atlanta history began in 1889, when businessman George V. Gress purchased a bankrupt traveling circus and donated the animals to the city of Atlanta. City leaders opted to house the collection in Grant Park, a popular Victorian picnic and promenade spot. Original residents of the zoo included a black bear, a jaguar, a hyena, an elk, a Mexican hog, a raccoon, lions, monkeys, camels, pumas and snakes.

Zoo Atlanta holds the largest collection of western lowland gorillas in North America, with 22 individuals living in social groups as of December 2009. Eighteen gorillas have been born at the zoo since 1988 (the year the exhibit itself first opened), all of whom have been mother-reared or reared by a gorilla surrogate. Kali and Kazi, a rare set of twins, were born at Zoo Atlanta on October 31, 2005. Their mother, Kuchi, is the only known gorilla ever to independently rear twins in captivity. Zoo Atlanta also remains home to all five of the offspring sired by its best-known gorilla, Willie B. (ca. 1959-2000). Two of these, females Kudzoo and Sukari, have given birth to infants of their own as its shown in Atlanta zoo map: Macy Baby, born December 2005, and Gunther, born July 2006. Zoo Atlanta has the nation only successful drill breeding program to date, having produced roughly half of the total U.S. population of these critically endangered primates.

Zoo Atlanta is one of only four institutions in the U.S. that house giant pandas. Parents Lun Lun and Yang Yang arrived in Atlanta as juveniles in 1999 and reside at the zoo on loan from China. The zoo celebrated the birth of its first cub, Mei Lan, on September 6, 2006. Mei Lan was the only giant panda cub born in the U.S. that year. A second cub, male Xi Lan, born August 30, 2008, was the only giant panda cub born in the U.S. in 2008. A third cub, Po, was born 3 November 2010, the first panda born in the US during the 2010 calendar year. Jack Black named Po after Black character in DreamWorks Kung Fu Panda to promote the release of Kung Fu Panda 2. Zoo Atlanta Herpetology Department is one of the largest and most diverse in North America, with over 450 reptiles and amphibians representing more than 115 species as you can see in Atlanta zoo map. The zoo is the only zoological institution to successfully breed Arakan forest turtles, a critically endangered species harvested nearly to extinction for food and traditional medicine.