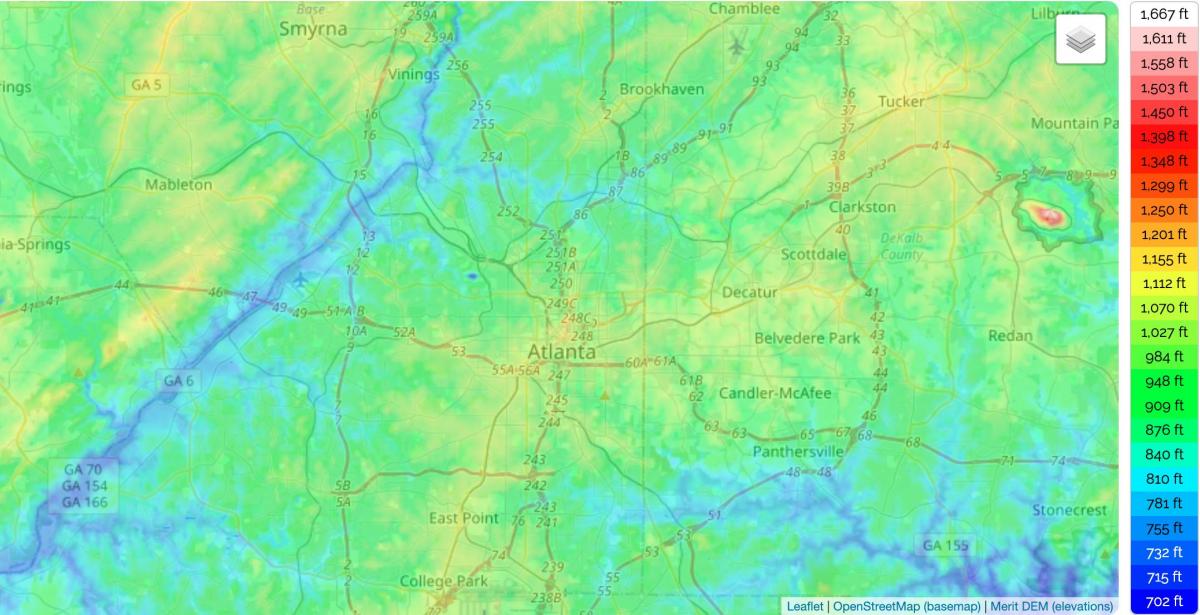 Located about 1,050 feet (320 m) above mean sea level as you can see in Atlanta elevation map, it sits atop a ridge south of the Chattahoochee River. Atlanta has the highest average elevation of any major city east of Denver. The Eastern Continental Divide line runs through Atlanta. Rainwater that falls on the south and east side runs eventually into the Atlantic Ocean, while rainwater on the north and west side of the divide ends up in the Gulf of Mexico via the Chattahoochee River. Being at the far northwestern edge of the city, much of the river natural habitat is still preserved, in part by the Chattahoochee River National Recreation Area. Downstream however, excessive water use during droughts and pollution during floods has been a source of contention and legal battles with neighboring states Alabama and Florida.

When considering the geographical statistics and location of any town or city, both in the United States and internationally, elevation is a very important term. Elevation tells us how high or low an area is in relation to sea level. The elevation of Atlanta is 1,050 feet (320 m), which means it has one of the highest elevations of any major city in Georgia and is actually one of the highest cities located to the east of the Mississippi. Various high points can be found in and around Atlanta. The highest point in the Atlanta metropolitan area is Kennesaw Mountain, which stands at an elevation of 1,808 feet (551 m) as its shown in Atlanta elevation map.