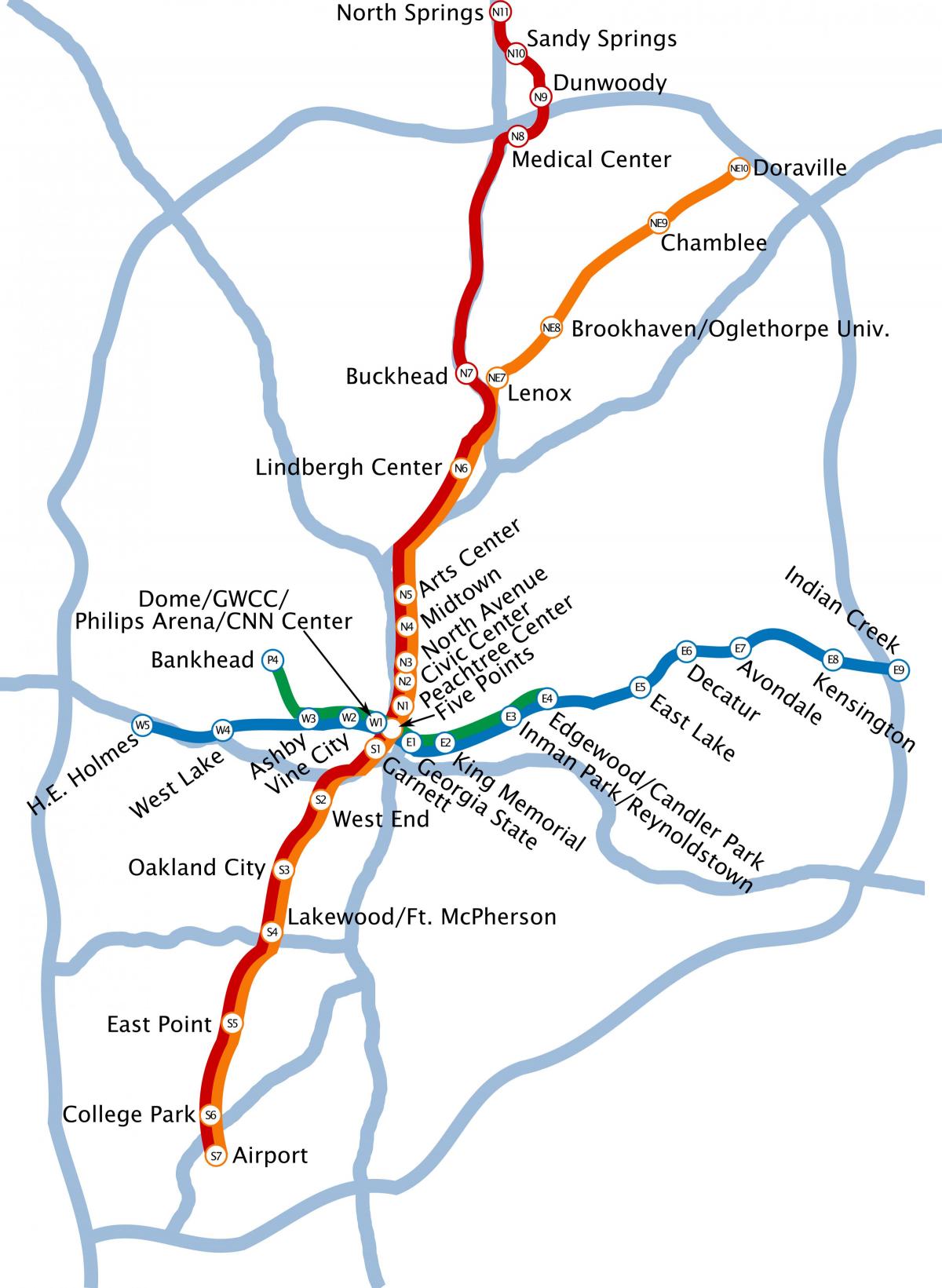 MARTA is the metro service of the city of Atlanta, the United States. It was inaugurated on June 30th, 1979 as its mentioned in Metro map Atlanta. It has four lines and 38 stations. The metro service offers connections to buses from many companies. The metro makes direct trips to the Hartsfield-Jackson Atlanta International Airport. The metro opens at around 5:00 am and closes around 8:30 pm or 2:00 am depending on the station. Single rides in the metro cost $2.50. It is recommended that you check the schedule beforehand to avoid waiting too long for the next train. You are only allowed to eat at the metro stations. Out of all the stations, the most artistically appealing station is Peachtree Center. There will be new customer service offices at four stations. There are many attractions near Five Points Station and Dome-GWCC-Philip Arena-CNN Station.

The Metro was proposed as a way to give transportation to the original five counties of Atlanta. The MARTA association was created on 1965 in order to build the metro. The process of obtaining the funds and the political support to create MARTA took over six years. Afterwards, the construction of the metro began on 1975. The Atlanta Metro was inaugurated on June 30th, 1979. It took over $790 million to build it. The first line to be inaugurated was the Blue Line. The Red, Gold, and Green lines were inaugurated on 1996, 1981, and 1992 respectively. There were some stations that were in the original plan that had to be discarded. Some of the stations that could not be built were going to be in the regions of Hopeville, West Highlands, North Druid Hills, Emory University, among others as its shown in Metro map Atlanta.

The Atlanta Metro Rail Project is the largest public works project undertaken in Southeast US to date. It consists of four railway lines – the Red Line, Gold Line, Blue Line and Green Line – that serve 38 metro stations and cover 79.2km as you can see in Metro map Atlanta. Prior to October 2009, these lines were named North-South Line, Northeast-South Line, East-West Line and Proctor Creek Line respectively. All the lines are operated by Metropolitan Atlanta Rapid Transit Authority (MARTA). MARTA began the construction of the East-West Line (now the Blue Line) in 1975, and the first train was put into service in June 1979. By 2006, around 259,900 passengers were using the metro system a year. The Atlanta Metro was initially intended to be an 81km rail network running partly underground (14km and ten stations), partly at grade (37km and 17 stations) and partly elevated (30km and ten stations). 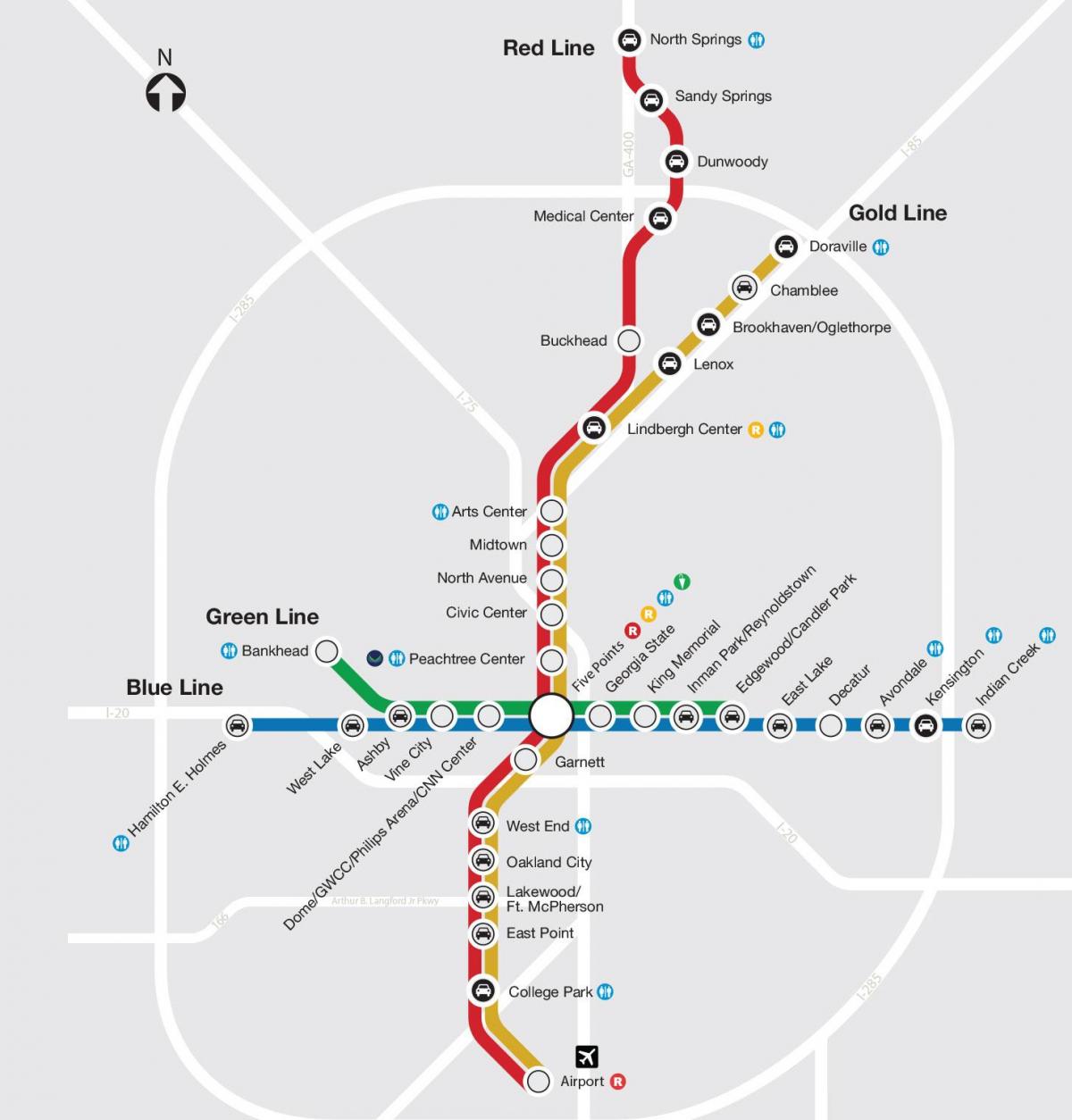 Atlanta subway system, operated by MARTA, is the eighth busiest in the country (see Atlanta subway map). Five Points is a subway station and was opened in December 1979, serving the East-West line only. The North-South Line level was opened on December 4, 1981. The section between Georgia State east to Avondale was the first section of the line to begin operating, with Decatur the only subway station in the stretch. The Arts Center station is a underground subway station with an island platform between two tracks. Along the platform walls, there is a brownish abstract art molded into the walls. The rest of the walls in the station are made of cement designed to look like wood. (Look close, you have to feel it to notice) There are other paintings found throughout the rest of the station, all are of different things, fitting for a station called "Arts Center." "Arts Center" signs hang from the ceiling. At the ground level of the station there is a rail to bus transfer inside the paid area. The Arts Center station opened on September 11, 1982.

At the northbound end of the Garnett station, the subway is entered and there is a single interline connection track (X track) between the South Line and East Line between Georgia State and Five Points stations. Below the Garnett platform is a little known dead-end storage track. MARTA only has four lines as you can see in Atlanta subway map. The red line runs south to north from Hartsfield-Jackson International Airport to North Springs, the gold line south to northeast from the airport to Doraville and the blue and green lines run east to west, with the blue line starting at Hamilton E. Holmes and green at Bankhead and both ending at Indian Creek east of Decatur. You can transfer from all lines at the Five Points Station in downtown. Note that while the gold and red lines both run north to south, they split at Lindbergh Station in south Buckhead. If you get on the wrong train, just get off at Lindbergh and wait for the next one.