You can find on this page the Atlanta tram map to print and to download in PDF. The Atlanta trams map presents the network, zones, stations and different lines of the tramway of Atlanta in Georgia - USA.
The Atlanta tram is one of the best ways to get around downtown Atlanta. It runs from Centennial Olympic Park along Auburn and Edgewood to the King Center with a stop at the MARTA Peachtree Center Station. Streetcars run every 10-15 minutes 7 days a week between 8:15am and 11pm as its shown in Atlanta tram map. 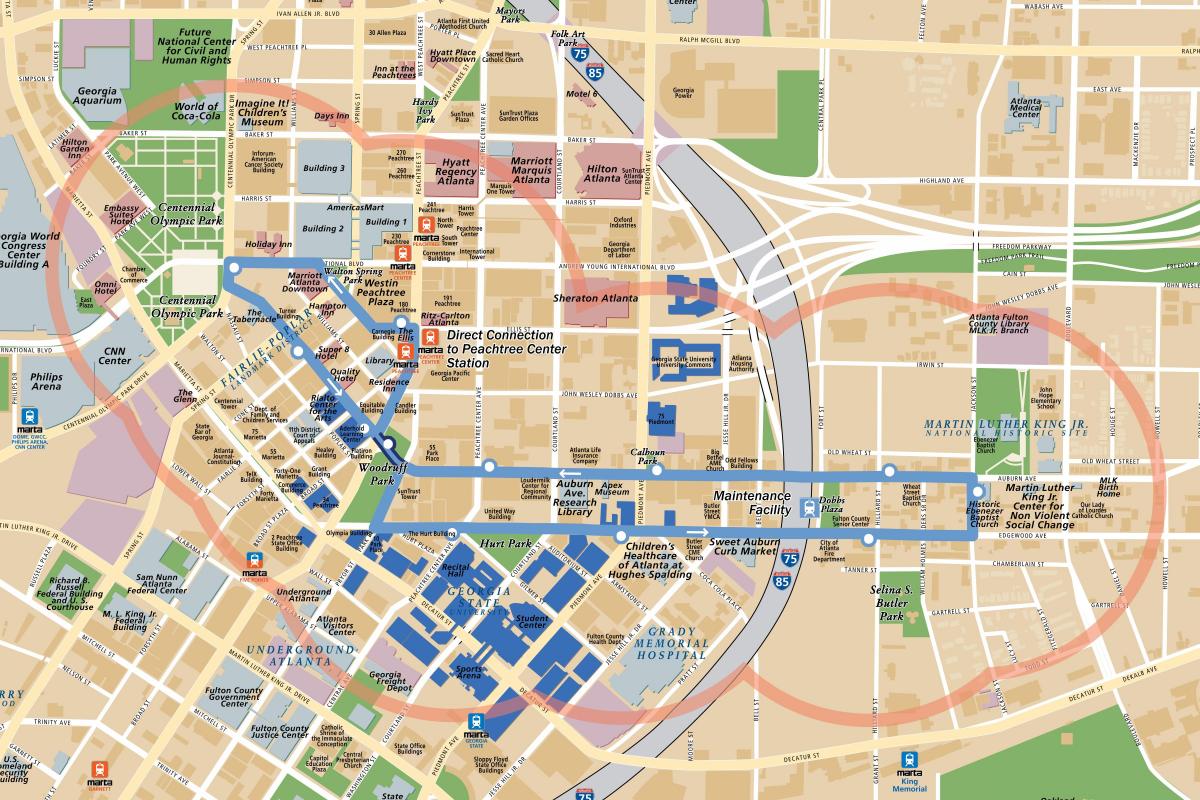 The Atlanta tramway system opened in 2014 and returned streetcars to Georgia after a 65-year absence. Originally owned and run by the City of Atlanta, MARTA took over operation of the Atlanta Streetcar in 2018. The standard fare for the Atlanta Streetcar is just $1 as its mentioned in Atlanta tramway map. No transfers to MARTA rail or bus are allowed and kids under 46″ ride free. Day passes with unlimited rides are only $3. The original focus of the BeltLine thesis was on establishing a light rail link around the central portion of the city. In Summer 2012, there will be a referendum on a 1-cent sales tax (SPLOST) to fund traffic and road improvements. If approved, the tax will fund several streetcar routes along portions of the BeltLine trail and connections onto MARTA stations and with the Downtown Loop streetcar.

In Summer 2012, there will be a referendum on a 1-cent sales tax (SPLOST) to fund traffic and road improvements (final list). If approved, the tax will fund: Two streetcar routes (maps, p.56-57): Midtown to Northeast: from North Ave. MARTA station east along North Ave. to the BeltLine, then north along BeltLine to 10th and Monroe (southeast corner of Piedmont Park) and south to Glenwood Park and connection to the Downtown streetcar at its eastern terminus. Downtown/Midtown to Southwest: one branch from Ponce City Market along North Avenue towards downtown as you can see in Atlanta tramway map. one branch from the western terminus of the Downtown streetcar at Centennial Olympic Park. the two branches meet at Luckie Street. Then along North Avenue, Northside Drive, out Donald L. Hollowell Parkway, then south along the BeltLine to the intersection of Ralph David Abernathy and Cascade Ave. Clifton Corridor rapid transit from Lindbergh Center to Emory University and possibly on to Avondale. MARTA northern extension to SR 140 in Roswell. Various "state of good repair" improvements to the existing MARTA system.

Additionally, several traffic corridors are currently being studied by MARTA for possible system expansion. The BeltLine is a current proposal for the use of light rail and possibly bus or tramway service on existing railroad right-of-ways around Atlanta central business districts (see Atlanta tramway map). The conversion of existing rail right-of-way to the proposed BeltLine also calls for the creation of three additional MARTA rapid transit stations where existing lines intersect the Belt Line at Simpson Road, Hulsey Yard, and Murphy Crossing. The BeltLine (sometimes Belt Line, Beltline) is a former railway corridor around the core of Atlanta which is currently under development in stages as a multi-use trail. Some portions are already complete, while others are still in a rough state but hikeable. Using existing rail track easements, it aims to improve not only transportation, but to add green space and promote redevelopment. There are longer term visions for streetcar or light rail lines along all or part of the corridor.