You can find on this page the Atlanta neighborhood map to print and to download in PDF. The Atlanta districts map presents quarters, region, suburbs and surrounding area of Atlanta in Georgia - USA.
There are many well-known neighborhoods in Atlanta, Georgia. Neighborhoods are generally considered to be housing subdivisions of a city as its mentioned in Atlanta neighborhood map. In some cases, other layers of intervening organization exist (for example, boroughs in New York city) that may not exist in all places. 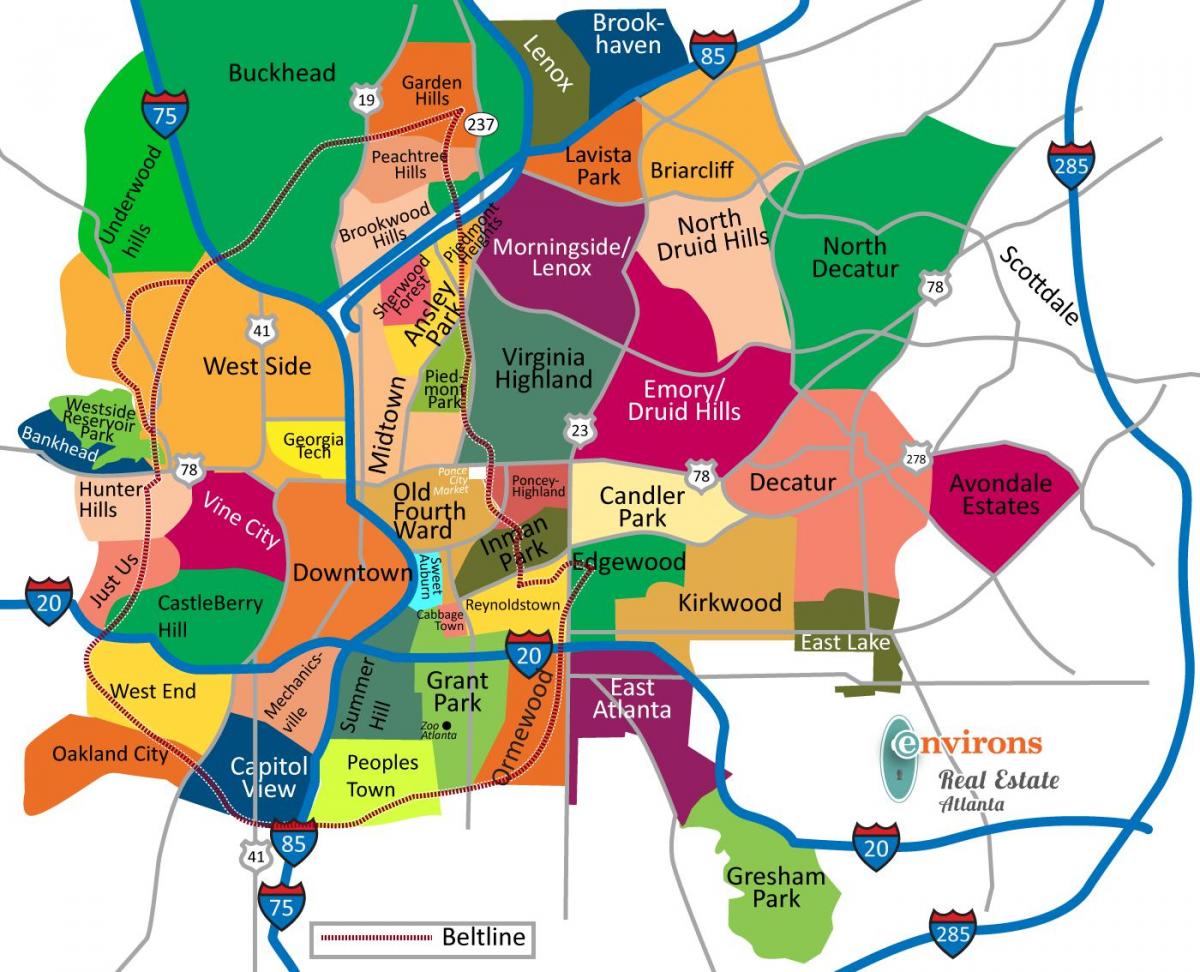 The Atlanta neighborhoods map shows region and suburbs of Atlanta areas. This neighborhood map of Atlanta will allow you to discover quarters and surrounding area of Atlanta in Georgia - USA. The Atlanta quarters map is downloadable in PDF, printable and free.

The city is divided into 25 neighborhood planning units or NPUs, which in turn are divided into 242 officially defined neighborhoods as you can see in Atlanta neighborhoods map. The three major high-rise districts within the city limits form a north-south axis along Peachtree: Downtown, Midtown, and Buckhead. Surrounding these high-density districts are leafy single-family residential neighborhoods. Downtown contains many notable skyscrapers, the most office space in the metro area and many government offices. Further north is Midtown Atlanta, a major employment center, including many law offices. Between 1990 and 2010, a skyline of office and residential towers took shape. Upscale retail stores are opening, though scaled down from previous (2006) plans. Buckhead is eight miles (13 km) north of Downtown. East side neighborhoods include Victorian Inman Park and Grant Park, craftsman Virginia-Highland and Kirkwood, and Bohemian Candler Park and East Atlanta. In West Midtown, former warehouses and factories have been transformed into condos, apartments, retail space, art galleries, and sophisticated restaurants. It is largely in these areas where the gentrification of Atlanta has taken place, transformed the city since the 1996 Olympics. As of 2010, Buckhead and northeastern Atlanta were on average 80% white.

In the city of Atlanta, as well as the Atlanta metropolitan area , there exist an intermediate level of organization, called districts or zones. The Buckhead district includes all of the city of Atlanta north of I-75 / I-85, and thus it has grown to include several neighborhoods, such as Peachtree Hills and North Buckhead. The Midtown district as its shown in Atlanta neighborhoods map can likewise be subdivided into neighborhoods like Ansley Park, Berkeley Park, etc. These districts are quasi-legal entities, defined by the city of Atlanta, and with some authority over zoning and property taxation through the system of neighborhood planning units (NPUs). The wealthy suburban area developed into a major commercial and financial center after Lenox Square mall opened in 1959. Skyscapers and hotels surround the mall, and around this commercial core are neighborhoods of single-family homes ranging from upper middle-class to very wealthy.

Outside the city, two additional edge cities exist: the Perimeter Center area and the Cumberland / Galleria area. Again, these community improvement districts have some taxing / zoning privileges, and overlap other boundaries. The Perimeter CID is in the cities of Sandy Springs and Dunwoody (though both were unincorporated when it was founded), and also includes part of unincorporated DeKalb county (southeast of I-285 ). The Cumberland CID (separated from the city proper by the Chattahoochee River ) includes the unincorporated town of Vinings as well as other parts of unincorporated Cobb county and incorporated Smyrna. All of these areas have Atlanta ZIP codes , with Sandy Springs and Dunwoody also allowed to use their own name instead of "Atlanta" on mail. Predominantly black neighborhoods cover 60% of the city area (see Atlanta neighborhoods map): northwestern, southwestern, and southeastern Atlanta were 92% African American as of 2010. 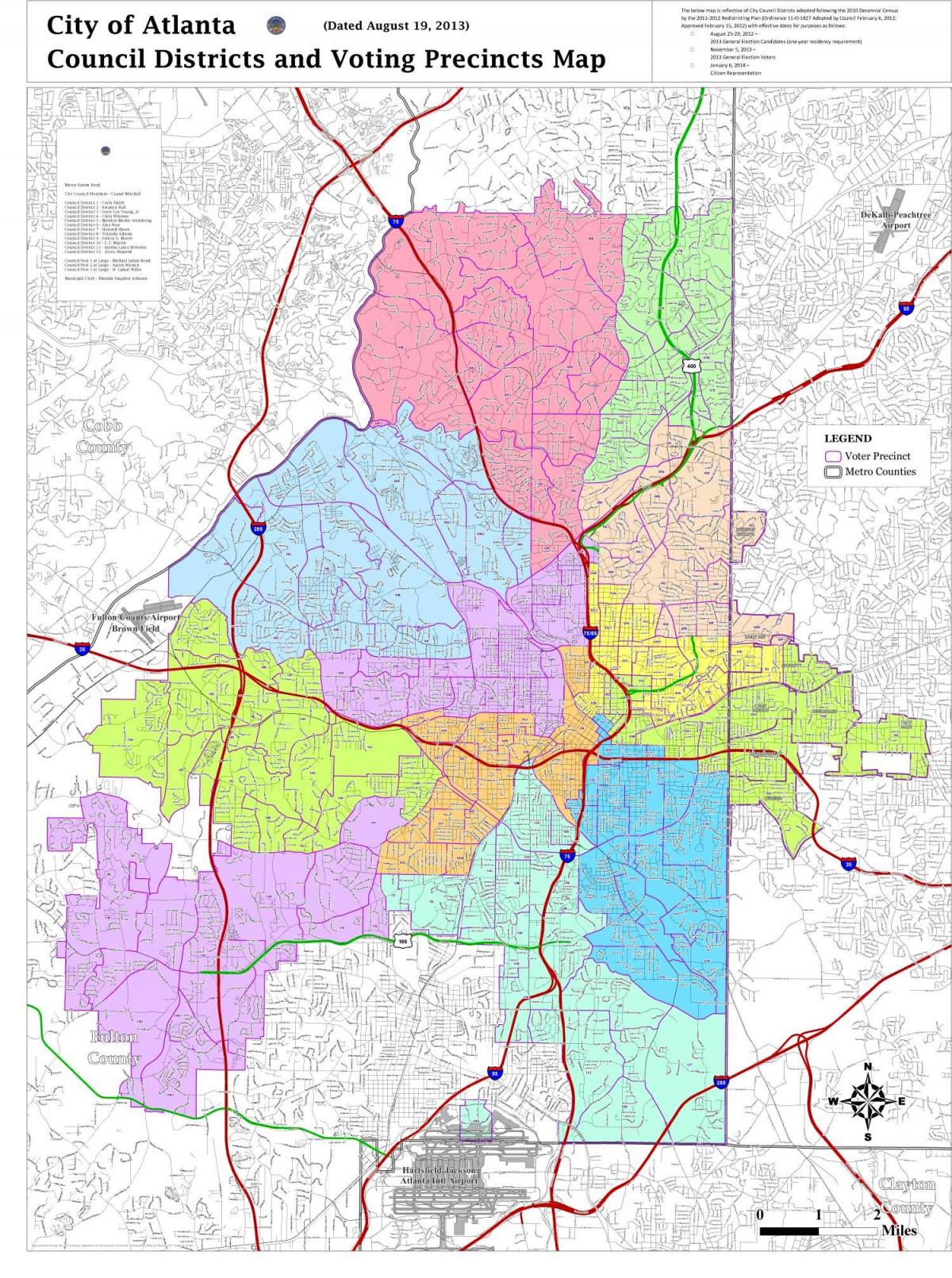 Atlanta contains more than 40 historic districts as you can see in Atlanta districts map, nearly all NRHP-listed. The most notable residential historic districts include Druid Hills, with its parks and parkways designed by Frederick Law Olmsted, Inman Park with its Victorian mansions (also Olmsted), Virginia-Highland with its Craftsman bungalows, and Cabbagetown with its shotgun houses. Notable industrial architecture includes Ponce City Market (formerly a Sears regional warehouse), the former Van Winkle Cotton Gin and Machine Works, Northyards (a converted roundhouse and rail yards), and other buildings in the Means Street Historic District, the proposed King Plow/Railroad Historic District, and on the Marietta Street Artery. The three major high-rise districts within the city limits form a north-south axis along Peachtree: Downtown, Midtown, and Buckhead. Surrounding these high-density districts are leafy single-family residential neighborhoods.

Atlanta is governed by a mayor and the Atlanta City Council. The city council consists of 15 representatives—one from each of the city 12 districts and three at-large positions as its shown in Atlanta districts map (a district system superseded the ward system in 1954). Atlanta also serves as the home of the United States Court of Appeals for the Eleventh Circuit and of the United States District Court for the Northern District of Georgia; the Federal Reserve Bank of Atlanta oversees the Sixth District of the Federal Reserve. The city is split between 14 state house districts and four state senate districts, all held by Democrats. At the federal level, Atlanta is split between two congressional districts. The northern three-fourths of the city is located in the 5th district, represented by Democrat John Lewis. The southern fourth is in the 13th district, represented by Democrat David Scott.