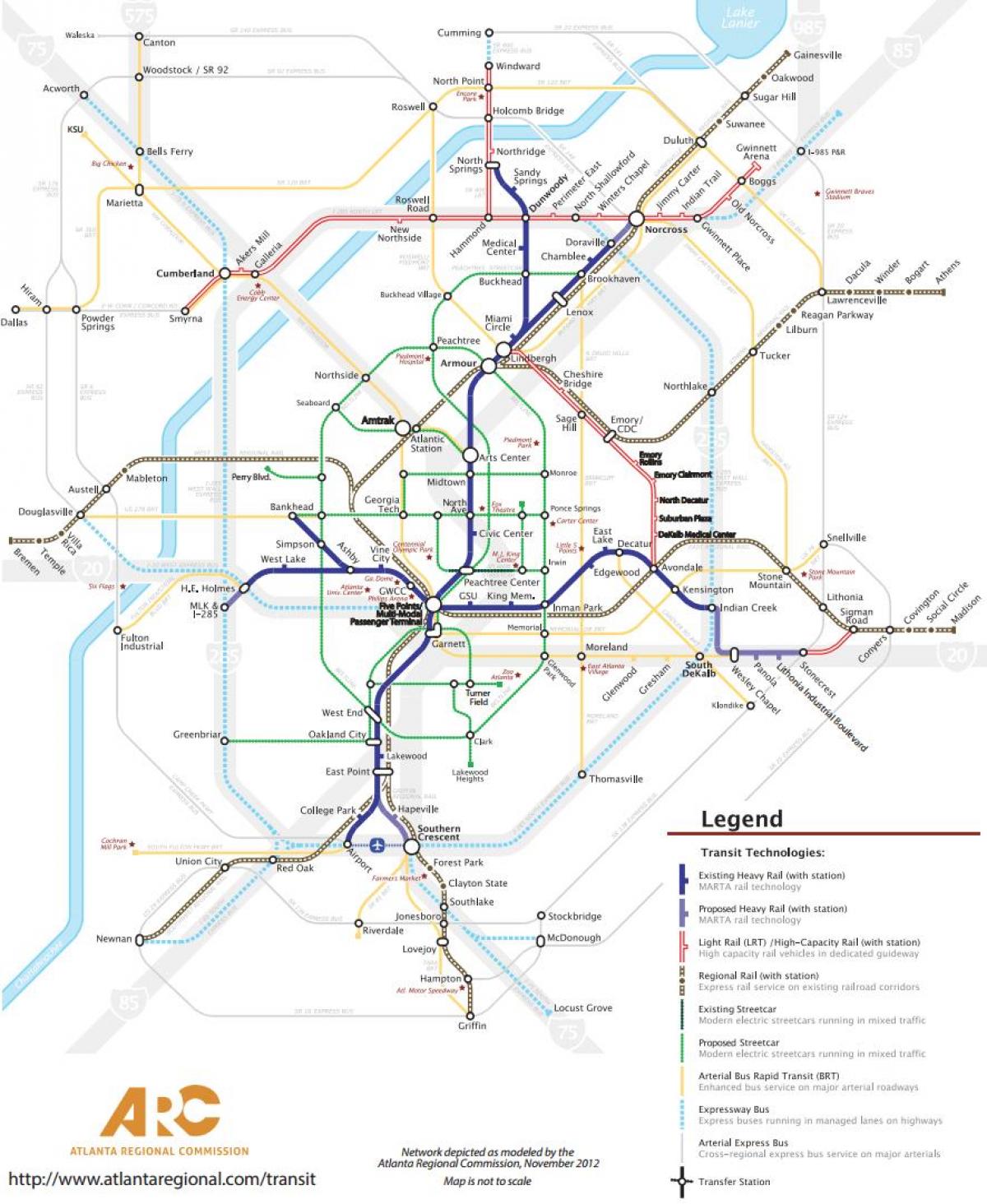 The rail system is complemented by MARTA bus system, the 14th largest in the country. The MARTA rapid rail system has 47.6 miles (76.6 km) of railroad tracks and 38 rail stations located on four service lines as you can see in Atlanta rail map: the Red Line (prior to October 2009, known as the North-South Line), Gold Line (former Northeast-South Line), Blue Line (former East-West Line), and the Green Line (former Proctor Creek Line). The tracks for this system are a combination of elevated, ground-level, and underground tracks. The deepest station in the MARTA system is the Peachtree Center Station which is located in a hard-rock tunnel, 120 feet (36 meters) beneath downtown Atlanta, where the highest hills in Atlanta soar to 1100 feet (300 meters) above sea level. No artificial lining of any kind was installed in the walls or the ceilings of this station, or the adjacent tunnels, but rather, the architects and civil engineers for this station decided to leave these with their rugged gneiss rock walls.

All the rail lines have an ultimate nexus at the Five Points station, located in downtown Atlanta as its shown in Atlanta rail map. MARTA trains are operated using the Automatic Train Control system, with one human train operator per train present to make announcements, operate the doors, and to operate the trains manually in case of a control system malfunction or an emergency. Many of the suburban stations have free daily and paid long-term parking in park and ride lots. These stations also have designated kiss and ride passenger drop-off areas close to the station entrances. MARTA rail cars are air conditioned steel-wheel trains which can operate at speeds of up to 70 miles per hour (110 km/h). The trains are powered by an electrified third rail and can be operated in any combination from two to eight rail cars.

MARTA operates 365 days a year. Rail service is provided from approximately 4:45am to 1am, Monday through Friday, and 6:00a. to 1:00a (see Atlanta rail map). on Saturday, Sunday & most Holidays. MARTA has no active rail construction projects. The Northeast Line of the rail system, which has ended in Doraville for two decades, was considered for extension into Gwinnett County as far as northeast as Norcross, Georgia, but this idea was cut off when the voters of that county declined to approve sales-tax funding for it. The final three MARTA rail stations to be built, Dunwoody, Sandy Springs and North Springs - all north of the Interstate 285 Perimeter, were opened in 2000. The tracks to those stations were run on the surface of the median strip of the Georgia 400 tollway which was constructed just east of the Buckhead area during the early 1990s. Thus is one of just two places at which the MARTA rail system extends outside of Interstate 285. The other is at the Indian Creek Station in eastern DeKalb County.